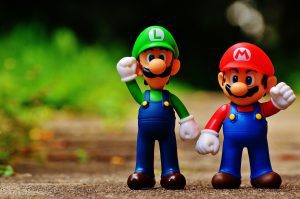 A new profile by Nintendo of everyone’s favorite Player One describes Mario as having worked as a plumber in the distant past, suggesting he’s a plumber no longer. The profile, first reported and translated from Japanese by Kotaku, focuses instead on Mario’s present-day activities, which include playing sports, racing, and generally being a hip dude:
All around sporty, whether it’s tennis or baseball, soccer or car racing, he [Mario] does everything cool. As a matter of fact, he also seems to have worked as a plumber a long time ago…

Mario’s history with sports and racing games is long and formidable, it’s his identity as a plumber that has helped forge him into the icon that many grew up with. The genius behind Mario’s persona is the unusual specificity of his life, as well as its every-man appeal. By making its mascot a blue-collar serviceman, the Japanese corporation created someone to root for in all situations, no matter how weird it got.

And it got pretty weird: An Italian plumber named Mario Mario who spends his time rescuing princesses and fighting giant turtles. The premise is simply so incongruous, implausible, and good-natured that it was impossible to resist. Mario’s plumber identity also explains his special relationship with pipes. Pipes are as integral to a good Mario platform game as jumping. The early hits of the Mario franchise dealt heavily with travel through pipes, and the imagery of those plumbing networks was maintained throughout dozens of Mario iterations.

So now with Mario gone we assume you’ll be forced to call Luigi, assuming he hasn’t left the profession as well. If he’s booked give us a call at Elkton Plumbing. We happily serve customers in New Castle County Delaware along with Cecil and Harford County Maryland.

Send an inquiry for all your plumbing needs